Chef Luigi Diotaiuti was named culinary “Ambassador” for representing the cuisine of his home region at the Basilicata Food & Wine Festival in Matera, Italy.

Chef Luigi Diotaiuti was named culinary “Ambassador” for representing the cuisine of his home region at the Basilicata Food & Wine Festival in Matera, Italy. Chef Luigi Diotaiuti, owner of Washington, DC’s Al Tiramisu and Aperto was honored with the title of being an Ambassador of Basilicata’s Cuisine in the World. The honor was presented by the President of The Federation of Italian Cooks, Rocco Cristiano Pozzulo to Chef Luigi with the goal of spreading the culinary and agricultural traditions of the ancient Lucanian territory to the world, at the national and international levels. The presentation was made to Chef Luigi within the company of his peers, the Italian Federation of Cooks, The Regional Union of Lucanian (from Basilicata) Cooks and the Agricultural Department of the Region of Basilicata.

Chef Luigi is in a unique position of being highly revered and involved in his home country as well as in the United States, with associates on every continent, two restaurants in Washington, DC, a cookbook, the Al Tiramisu Restaurant Cookbook which beyond its recipes, details Basilicata’s regions and culinary landscape. Recently, Chef Luigi celebrated the 40th anniversary of graduating from culinary school in Basilicata, as well as the 21st anniversary of opening Washington DC’s “most authentic” Italian restaurant, Al Tiramisu. In 2016, Chef Luigi opened his second restaurant, Aperto, also in Washington, DC. Chef Luigi shares his passion for food to many students, young and old with his Italian Traditions Culinary Series Classes. He shows his love of the communities he serves in Italy and in the US by designing culinary programs that fit relevant causes. 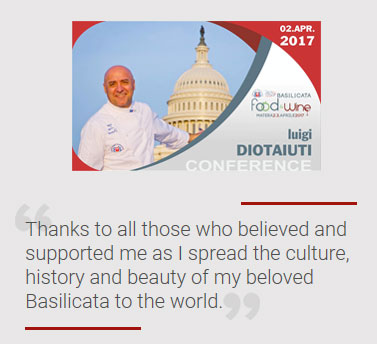 About Chef Luigi Diotaiuti
Born in Lagronegro, Basilicata, interpreting and preserving the region’s culinary traditions has been Chef Luigi’s lifelong quest. Holding dual citizenship in Italy and the US, Chef Luigi is passionate about giving back to both communities, which he considers home. In the United States, he is a member of the American Chefs Corps Network with the U. S. Department of State. When he is not cooking for celebrities like Italian Prime Minister Mario Monti, Former Secretary of State, John Kerry and actor George Clooney, Chef Luigi makes frequent appearances on US and Italian television and has been featured in countless print media articles. Chef Luigi is a member of The James Beard Foundation, The Diplomatic Culinary Partnership, Slow Food DC, The International Association of Culinary Professionals, the Culinary Historians of Washington, The Federation of Italian Cooks, and is affiliated with the National Concierge Association and Ciao Italia.

About Al Tiramisu – http://www.altiramisu.com/
Al Tiramisu is a cozy, unpretentious place in a simple brick townhouse in Dupont Circle, a lively neighborhood in Washington, DC. Their mission since the day they opened in 1996 was to create not only a delicious but an authentic, joyful Italian dining experience. Their patrons include students to celebrities and politicians. We respect the food and the customer and serve fine dining, great wine and a joyful atmosphere.

“Contemporary cuisine refers to the integration of time honored culinary traditions in today’s kitchens in order to preserve them for future generations.” — Chef Luigi Diotaiuti