“I Am Living Proof of the American Dream, With Luigi Diotaiuti of Al Tiramisu”

An Interview with Vicky Colas in Authority Magazine, January 26, 2021

As part of our series about immigrant success stories, I had the pleasure of interviewing Luigi Diotaiuti.

Award-winning Chef/Restaurateur Luigi Diotaiuti was dubbed “The Ambassador of Italian Cuisine” by the Federation of Italian Cooks in Florence, Italy in 2018. The owner of Washington DC’s Al Tiramisu (named one of “the 50 Top Italian Restaurants in the World 2019” by www.50topItaly.it) has been a celebrity favorite for decades. The certified Sommelier and television personality is also known for promoting culinary traditions on the verge of extinction in the United States, Italy, and around the globe. Born, raised, and educated in Basilicata, Italy, Chef Luigi trained at some of the world’s most prestigious locations before opening Washington DC’s “most authentic” Italian restaurant twenty-four years ago. His current culinary pursuits and consistent media presence in the United States and Italy enable him to enjoy notability and distinction in both countries. In 2017, he was named “Ambassador of Basilicata’s Cuisine in the World” by The Federation of Italian Cooks. Chef Luigi received the “La Toque” award by The National Area Concierge Association at The Basilica of the National Shrine of the Immaculate Conception in Washington, DC in 2018.

Born on a farm near Lagonegro, Basilicata, Chef Luigi’s farm to table roots created the foundation for his current culinary philosophy. He is a distinguished alumnus at the culinary school in Maratea, where he often returns as a keynote speaker. Chef Luigi’s formal training includes working in renowned restaurants such as the Hotel Georges V in Paris, the Grand Hotel Bauer Grunwald in Venice, Il Gourmet restaurant and Hotel Bellavista in Montecatini, Tuscany and Costa Smeralda and Forte Village in Sardinia. He opened Al Tiramisu restaurant in 1996, and was awarded the coveted Insegna del Ristorante Italiano, the seal of approval by the President of Italy as well as Gambero Rosso’s Top Italian Restaurants 2018 award, and Slow Food DC’s Snail of Approval award.

Chef Luigi is a member of the American Chefs Corps Network through the U.S. Department of State where he led culinary activities and attended programs at the Milan Expo on behalf of both the American Chefs Corps and on behalf of his native region of Basilicata. When he is not cooking for celebrities like Italian Prime Minister Mario Monti, Secretary of State John Kerry, and actor George Clooney, Chef Luigi makes frequent appearances on US and Italian television and has been featured in countless print media articles. Chef Luigi is a member of The James Beard Foundation, The Diplomatic Culinary Partnership, Slow Food DC, The International Association of Culinary Professionals, the Culinary Historians of Washington, The Federation of Italian Cooks, and is affiliated with the National Concierge Association and Ciao Italia.

Holding dual citizenship, Chef Luigi is passionate about giving back to both communities which he considers home. He founded a non-profit organization called Basilicata: A Way of Living to maintain the local traditions of the region while creating jobs and tourism. A few years ago, he also founded Pasta Lab, an event which pairs professional chefs with female home cooks to uphold the artisan pasta making traditions of the past. In DC, Chef Luigi teaches the students in the culinary program at DC Central Kitchen to make the same time-honored recipes — creating a culinary bridge between the two cultures. He also spends the little free time he has attending and conducting demonstrations at farmer’s markets, participating in culinary competitions, hosting benefit events, and cooking with local school children.

Chef Luigi filmed a demo for a television series with Chef Amy Riolo. The duo also created a video documentary entitled The Beauty of Basilicata at the James Beard Foundation in honor of the dinner he served there in 2013. They led a culinary cruise from Istanbul to Athens on Oceania Cruises in 2014, and wrote Chef Luigi’s first cookbook, The Al Tiramisu Restaurant Cookbook: An Elevated Approach to Authentic Italian Cuisine (December 2013). Dubbed “The Next Big Thing in the Culinary World” by Elle Spain, they also create many successful culinary diplomacy events, cooking classes, and events together.  Read the full article here. 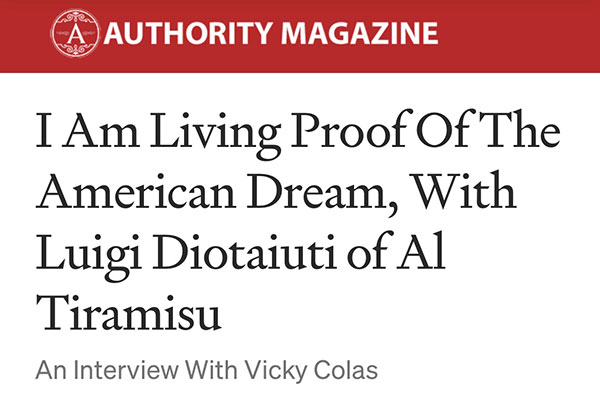